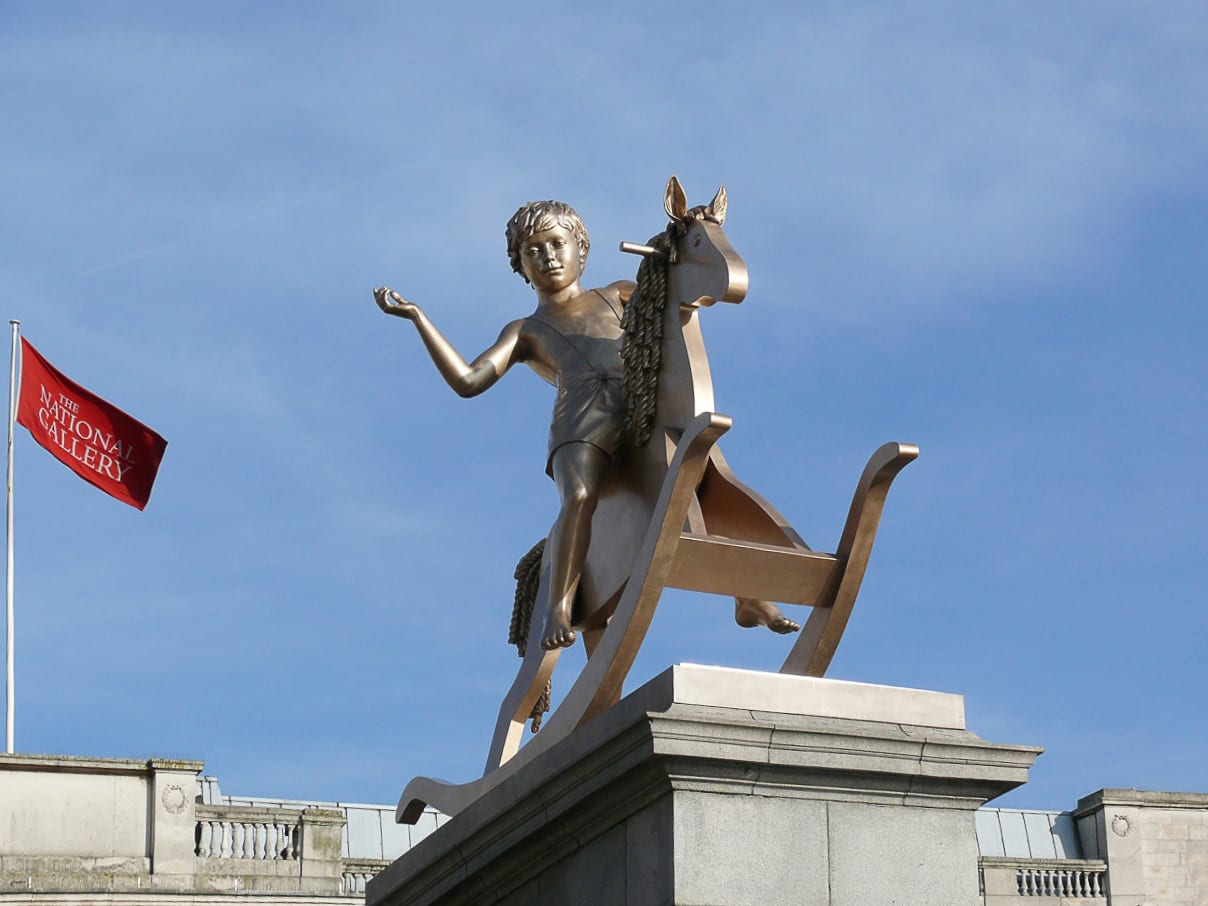 Sitting In the centre of London, stands Trafalgar square, in the centre, on a 170 foot column stands Admiral Horatio Nelson, guarded by four Imperial Lions By Sir Edwin Landseer, they gaze unseeingly across the square filled with Sir Edwin Lutyen’s fountains and Statues of Long dead Generals astride their Cavalry chargers, their names ring down through English history, His Majesty George IV, Generals Napier, and Havelock, Admirals Jellicoe and Cunningham.

On the North-West plinth, however sits an unknown classically proportioned child riding a rocking-horse, one hand on the rein, the other waving in the air as he joyfully gees up his imaginary steed.

“Powerless Structures, Fig 101” has been created by sculptors Elmgreen & Dragset: “This is a celebration of ordinary life that goes on between the more spectacular events like wars or other crises” said Michael Elmgreen.

The 4.1m golden bronze sculpture is the fifth artwork to be installed on the vacant fourth plinth over the last seven years. The fourth Plinth was originally going to have another military equestrian statue of HM William IV, but funds run out and the Plinth was empty for 150 years. Critics argued that this made the square out of balance and many squabbled over who was deserving of a place in this iconic London location. In 1998 The Royal Society of Arts conceived the “Fourth Plinth Project” that would see the Plinth with a series of semi-permanent contemporary art works.

“We already produced the highest quality Fine Art Castings, though we had a vision to further improve, as well as make our process more effective and efficient, a vital strand of that project of that was to achieve as near to the form that the Artist intended as possible. We needed detail, surface finish and know-how to produce art which may stand in the public domain for many centuries. Remet have been instrumental in helping us to develop the Lost Wax Process, and provided much assistance over the years. We have cooperated well, and look forward to furthering this partnership.”

AB Fine Art was founded by Henry “Ab” Abercrombie in the 1970s, and has become the Art Foundry of choice for Brit Art A- Listers. This is in fact the second piece made by AB Fine Art with Remet materials to have graced the Fourth Plinth. The first one we made was by Bill Woodrow’s “Regardless of History”.

“Powerless Structures, Fig 101” will remain on the fourth plinth for a year before being replaced by “Hahn/Cock” a giant Cockerel symbolising “Regeneration Awakening and Strength”.