Remet has developed an innovative new colloidal silica based binder system. Adbond® Quikset™ uses a novel process to set up and gel more quickly than conventional systems, and in doing so provides for a  surprisingly higher green strength and improved crack resistance in autoclaving. Adbond Quikset provides for faster gelation times and therefore quicker cycle times. The rapid drying action is particularly effective on intricate and recessed areas. The improvement is dramatic with proven cycle times reduced to below one hour when used under optimal conditions, and though primarily formulated for fast set up, the higher green strength provides for ease of handling and dewax. In a fully optimized condition shells have been coated first thing in the morning, dipped every hour, and autoclaved and cast by the end of the working day.

From wax to cast in one day! 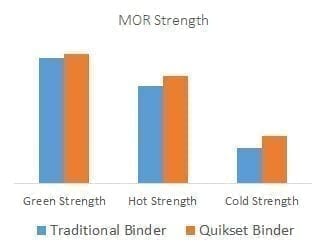 Quikset  has been formulated differently from existing technology because it works in a novel way. The film – forming ability of many enhanced binders reduces water loss, in the same way that it reduces wet-back.   Laboratory experiments have demonstrated that evaporation of water from a gelled Quikset layer remains unimpeded. Measured by temperature drop of evaporation Quikset shows more rapid loss of water from a stuccoed layer than a regular shell system. The system is formulated to gel early, in the sure knowledge that the evaporation of water from the layer will continue at a high rate.

Further laboratory experiments conducted at REMET Central Research and Development Facility have demonstrated by the use of Dynamic Mechanical Analysis that the shift in modulus caused by  the sol-gel transition happens 30% quicker in Quikset compared to a traditionally formulated system.

Quikset formulates in a very similar way to existing enhancement systems, and, provided there is adequate polymer present, thicknesses, viscosities and final ceramic characteristic are reproduced when a traditional polymer is swapped out for Quikset.

REMET ran a trial with Quikset at an automotive foundry, comparing it with their traditional slurry system. The aim was to dramatically reduce the cycle time of part shell production without impacting shell integrity.

The slurry was made up and allowed to stabilise for 16 hours prior to use. The primary coat was applied in advance and dried as normal.

The first 3 backup coats were applied every hour, with the final 2 two hours apart. One shell was autoclaved 1 hour after the final coat, Just 7 hours after the first coat.

The mould was cast the following morning, the shell did not leak. The resulting castings were all of saleable quality.

The remaining shells were autoclaved after a 16 hour drying time over night, and were all successfully autoclaved and cast.

The resulting shell production was completed in just 11 hours, compared to the 36 hours usually required for this particular tree. 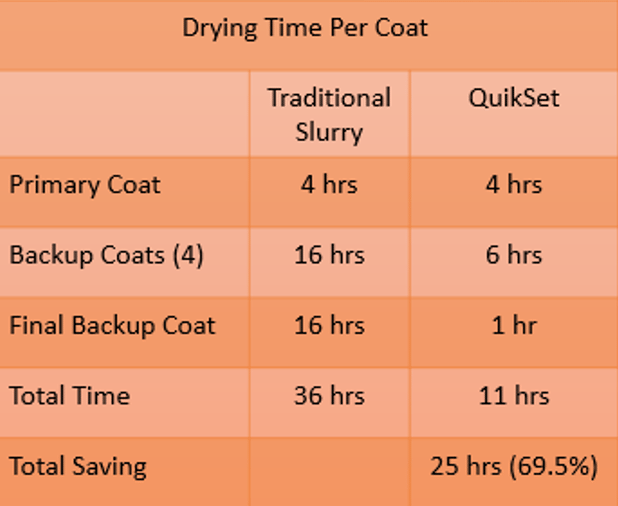 In this example the cycle time was reduced by nearly 70%, however as each foundry and product is different actual results may vary. Ask us to show you how Quikset can improve you process.

< Back to case studies