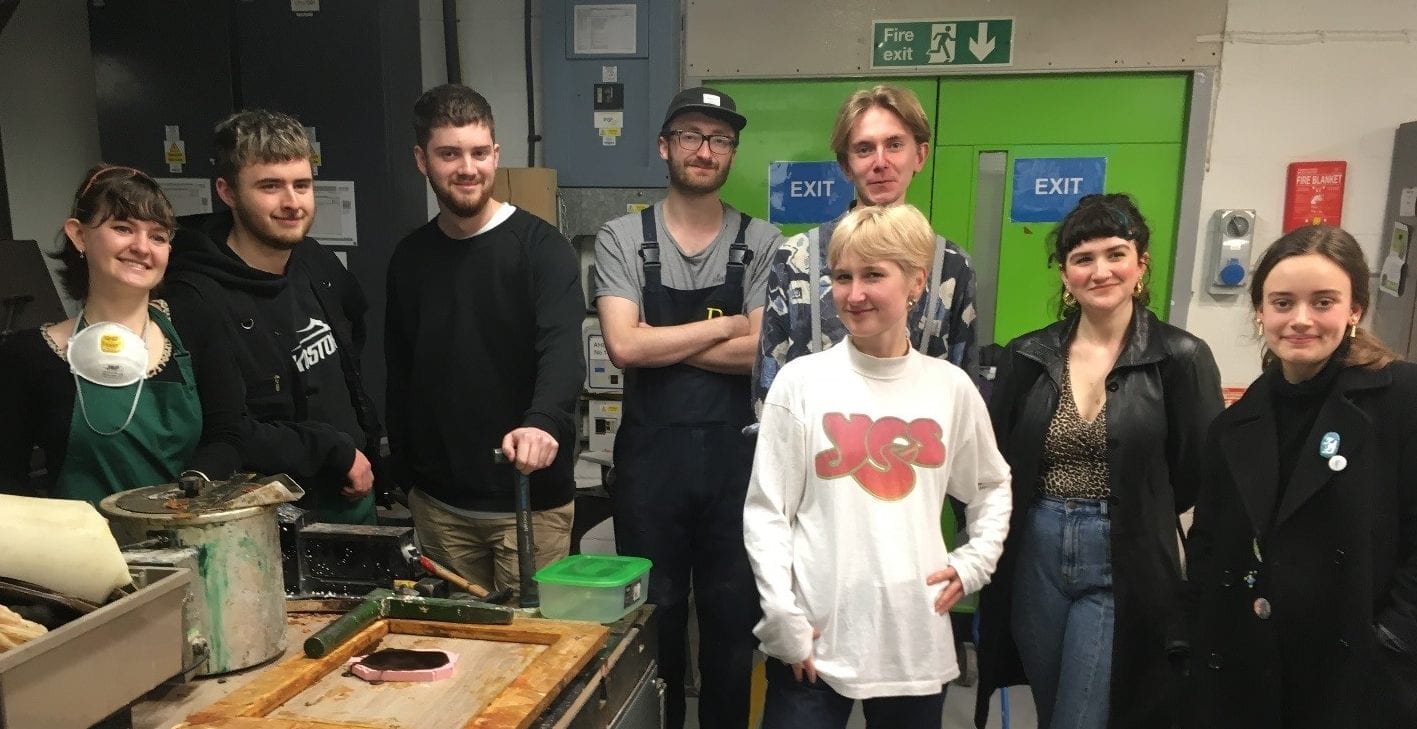 REMET UK is proud to be working with Kingston School of Art and AB Foundry on the 2019 REMET Art Prize.

The prize was open to students at Kingston School of Art to create a sculpture using the investment casting method. More than 50 entries were received from across the School from which 8 finalists were selected. The selected final proposals demonstrated an eclectic mix of styles and ideas, that they will model and cast ready to present at the final show. At the final show, a panel of judges will select the winner.

I have been working on a series of drawings called “Attempts at drawing horses”. It has involved me trying to draw horses from memory. I am interested in copies of things that are derived from an original i.e Trojan Horse, hobby horse. This cast horse would be the first in a series of my attempts to cast the attempts, turning them from 2D into 3D.

Bronze is a material reserved for high sculpture and historic monuments based on an area’s heritage or tradition. Boozing is engrained into British culture and deserves its own monument; not in celebration not condemnation but an acknowledgement. ‘A Memorial to the British Summer Time’ is in remembrance to those first few sunny days of the year when the British public flocks to parks all over the country after work for a couple of cans, and maybe a Tesco meal deal.

This piece uses a state of the art 3D scanner of the monuments on public display at Spandau Zitadelle museum in Germany. Made in the late19th century, these monuments depict legends from history to convey the “German spirit’. After the second world war they were buried on the outskirts of Berlin until re unification when they were dug up and acquired by the museum.

My sculpture is the physical realisation of a drawn form which I have been engrossed with in recent months. The sculpture began with my drawing of a non-functional set of stairs, which then became an etching and progressed into a painting. I created a 3D version as a drawing tool in order to correctly work out the shadows that the form would create, had it been solid. My obsession with the form has led me to use new materials including wax, which I have found an immediate affinity with. I am very keen to see how the sculpture works in bronze and to experiment with patination.

The object is a ‘data centre’ which mimics the physical structure in which a supercomputer might operate. Each data ‘unit’ sits on a unifying base and is connected by ‘cables’ reminiscent of a human ribcage and spine. The structure is designed so that projected light can pass through and create a silhouette.

Through creating a bronze Yorkshire pudding, I want to mock the vast history of bronze that has been used in the art environment and the connotation of opulence and pomp. I am also bringing to the forefront the aspects of British culture that feed and generate British humour. Being a huge fan of British humour from The Only Way is Essex to the nation’s obsession with Greggs I want to demonstrate that you can combine high aspects of art with subject matter that is more relatable to the general populous.

‘Switch’ presents a found object in its final stages of reproduction. By processing and reconstructing a discarded Toggle Switch through my conscious and subconscious actions of making, I aim to replicate aspects of control and manipulation through inanimate forms.

Chloe Webster – A Gun in a Tesco Bag

The object is a cast line of text, a poetic image awaiting its fulfilment. The text mimics the fonts of neo-noir films and brings a sense of drama.

The competition gives the students an opportunity to learn about the investment casting process, a medium that was new to them. This gave them a new dimension to work with when developing their ideas. 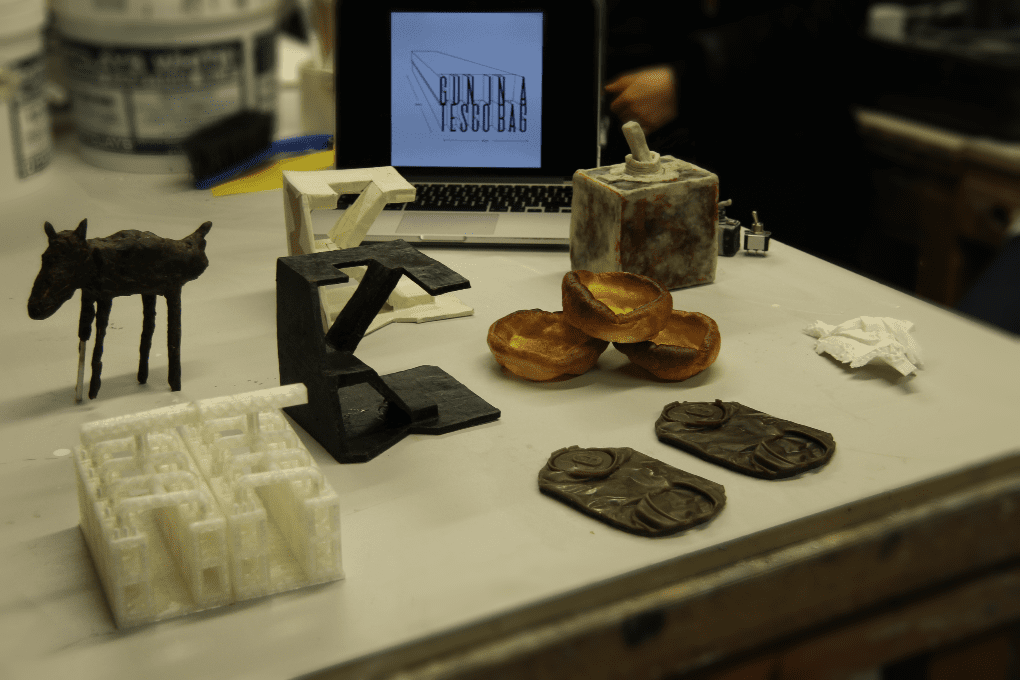 We were invited into the studio to meet the finalists and discuss their entries, while we were there the students showed us how their patterns were developing.

The students also demonstrated some of the techniques they were using to create their patterns, in advance of shelling and casting. 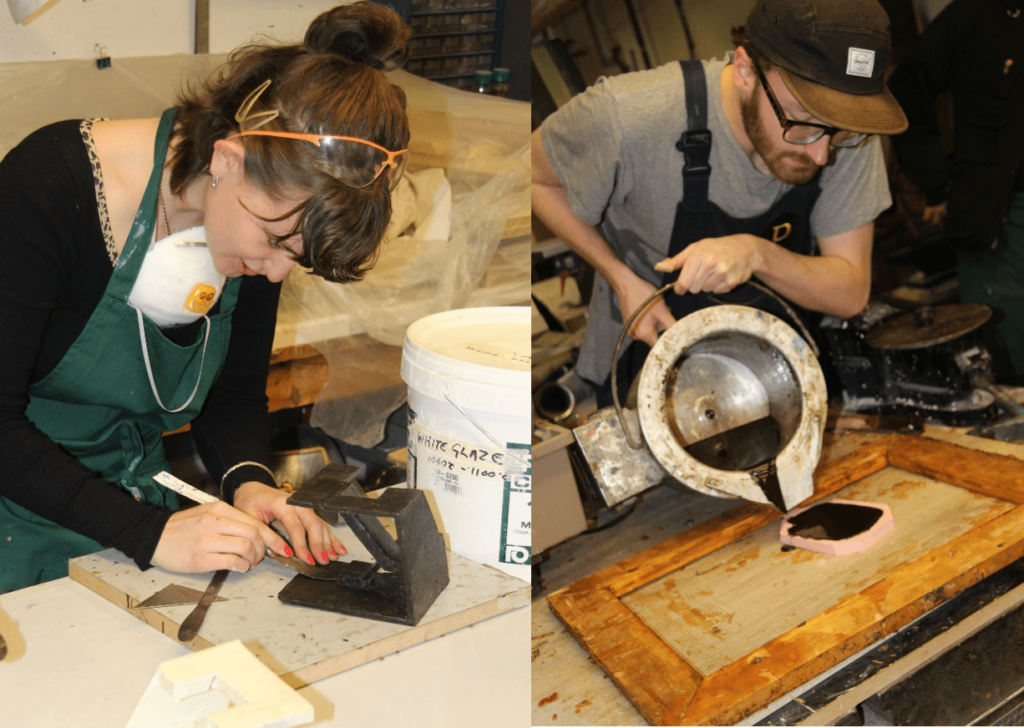 The finished works will be on display at the Stanley Picker Gallery week commencing 20th May 2019, with the winner being announced 22nd May.